In the direction of Bijay Jain, for the honor of the national language found in Hindi, meetings were held in major cities like Mumbai, Kolkata, Delhi, Lucknow, Bhopal, Hyderabad, Chennai, Chandigarh, Bhubaneswar, Guwahati etc. in which a large number of Hindi literates, language lovers and journalists took part, there were encouraging reactions from the media’s senior personalities, it was agreed that it would be welcome and historic event to get the entire media on one’s resolve to get ‘Hindi’ constitutional recognition.
Continuing his endeavor, Mr. Jain gave a request to the Government of India on the death anniversary of Mahatma Gandhi on January 30, 2017 from Rajghat, Delhi that constitutional honor should be given to ‘Hindi’ as the national language of India, the support of President of India, Prime Minister, Chief Minister, MPS, Editors at journalists, linguists and writers was also received. This convoy did not stop here. On January 5, 2017, the Terapanth Bhawan Bhubaneswar, on January 12, 2017, Hindi Sahitya Sammelan Office, New Delhi, January 19, 2017, Assam National Language Committee on Guwahati, 22 January 2017 Press Club, Chandigarh, January 30, 2017 , February 6, 2017, Mumbai Municipal Corporation, March 4, 2017, at Bagarka College Mumbai, March 16, 2017, aye college, Vile Parle, March 23, 2017, Marwadi Public Library, New Delhi, Press Club Raipur on May 14, 2017, Kund-Kund Dnyanpeeth Indore on June 18, 2017, from 26th to 30th September for the first time in Mumbai, the world-class Indian language book fair of 24 Indian languages was organized, which was inaugurated by the Governor of Goa, honorable Mrs. Mrudula Sinha, Mr. Jain received praises & support from the Governor of Goa, all the dignitaries and guests ad general people for his efforts toward the development & enrichment of Hindi and all other Indian Languages on January 6, 2018, three-day International Conference in Kolkata, Mr. Jain’s spirit ‘First Mother Language-Then the national language’ have to bear the junction of coming down from the platform.
It is said that there should be passion in life, success kisses the steps. Mr. Jain organized the ‘Bharatiya Bhashae Sammelan’,

on 22 January 2015 at the University of Mumbai, which was inaugurated by Mr. P.B. Acharya, Honorable governor of Nagaland . He said that the respect of Marathi language to be increased in Maharashtra, I respect Bijay ji for this feeling and effort.
Today, Bijay Kumar Jain has made the only goal of his life to make attempts to bring together the Jain society which is divided into the world through his internationally renowned magazine “Jinagam” and gatherings , to bring industrialists and culture lovers together by introducing “Rajasthan” by “Mera Rajasthan magazine”, while Rajasthan is forgetting its culture today. Mera Rajasthan, edited by Bijay Kumar Jain is introducing the history of many of the villages and cities of Rajasthan by the magazine is not being made just unique, the historic work being done is being honored, he is also publishing “Main Bharat Hoon” by the cleanliness of Indian politicians. In urging top political leaders, they are saying that by removing the sloppy politics, promote India’s honor in the world.
Bijay Kumar Jain is requesting to the Indians spreaded in nation and abroad that ‘First Mother Tongue-Then National Language’, should be our motto language of every states should be graded as state language and the ‘Hindi’ should be honored as national language, for which Mr. Jain has requested to the President, Prime Minister, Chief Ministers, MPS, Rajya Sabha etc. to save Indian linguistic culture and ‘India Gate’ should be written as ‘Bharat Dvaar’.
To national culture, and to honor the Indian languages, we make hypothesis that Mr. Jain’s guidance is received to the family of “East West Andheri Times”, “Jinagam”, “Hindikalyanyas.co.in”.
Bijay Kumar Jain, founder president of “Hindi Welfare Trust”, has been engaged in the service of country, religion, society and politics through Hindi journalism for the past 36 years. Mr. Jain started his publication with the publication of “East West Andheri Times” with Video Boom, the Journey of his journalism, is currently editing three & a weekly newspaper magazines.

Bijay Kumar Jain, founder president of “Hindi Welfare Trust”, has been engaged in the service of country, religion, society and politics through Hindi journalism for the past 36 years. Mr. Jain started his publication with the publication of “East West Andheri Times” with Video Boom, the Journey of his journalism, is currently editing three & a weekly newspaper magazines.

With the aim of establishing unity among the various cultures and religions of Jain society, 19 years ago, Shri Bijay Kumar Jain started publication of ‘Jinagam’ magazine, along with the support of all sections of Jain society, along with the support of Jain Dharmacharyas and Gurus, with the blessings of the God, ‘Jinagam’ continues to be on the path of popularity & enlightenment people about the Jain culture.

About 14 years ago, Jain started the publication of ‘Mera Rajasthan’ magazine, with the spirit of subsistence of responsibility towards the homeland of Rajasthan, his through this magazine, he is not just acknowledging only the present generation of glorious history of Rajasthan he is also making a great effort to get all the Rajasthanis together in the form of unity, along with Rajasthan and he is providing a history of Rajasthan to Rajasthanis spreaded over nation-abroad.

With his religion and region, Mr. Jain focused on India, Indianism and Indian language and culture, to shape his feelings, he launched the magazine 7 years ago. This magazine is very popular in Political & social having the history of different states of India and the information of the history of various states of India and various political parties are being made available.

Founded on August 11, 2014, the Jinagam Foundation. Its main purpose is to provide work for all sections of the society, and for the protection of environment, through the foundation, providing free education medicines of the needy children required.

For the “unity of Rajasthani”, March 29-31, and April 1, 2018, organized a 4-day Rajasthan Mela in the ancient Rajasthan city of Mumbai, in which people from Mumbai-Maharashtra and from whole India were present.
Bijaykumar Jain struggled during his early life, saw many ups and downs stood on the street and sold newspapers; he interviewed many political-industrialists-gurus- the figures associated with the academic field; he entered in the world of journalism from the interview of “The Big B” Amitabh Bachchan, In addition, he has also done many such works in social and national interest, which is unique in itself.

On the 5th June World Environment Day, we put Neem tree in the courtyard of our area so that we get a chance to live in a pure environment. Our purpose is merely the purity of the environment, which can be done only by tree plants, Neem tree is known for its oxygen transmission. Which is also beneficial to human and beneficial to various human beings.

Walk Alone, Group Would Be Made.
- Rabindranath Tagore 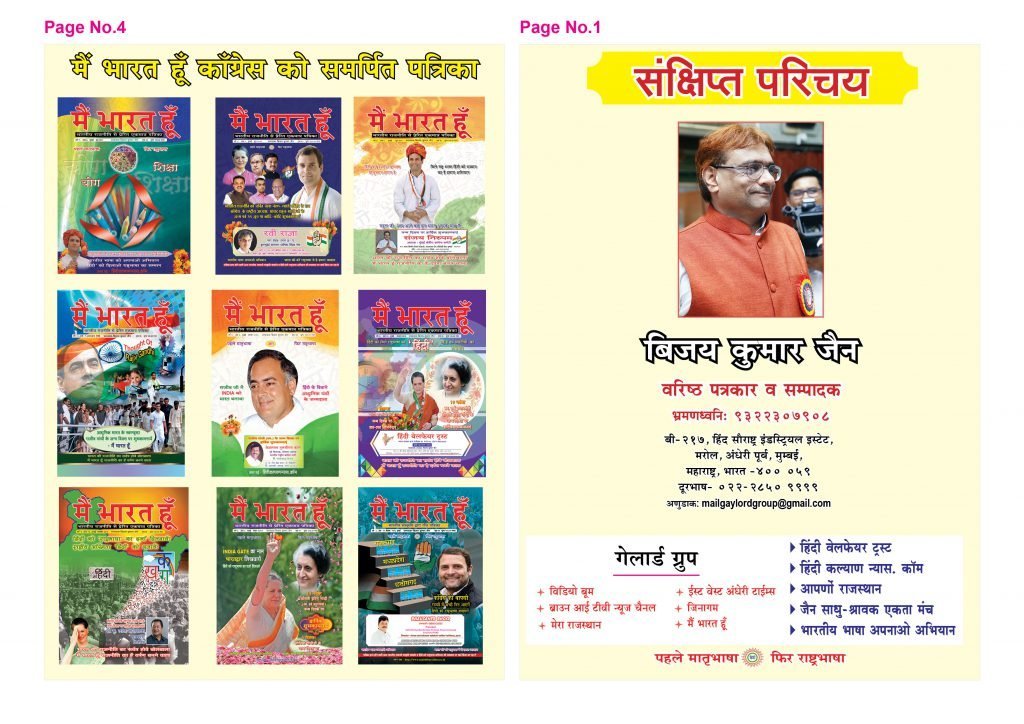 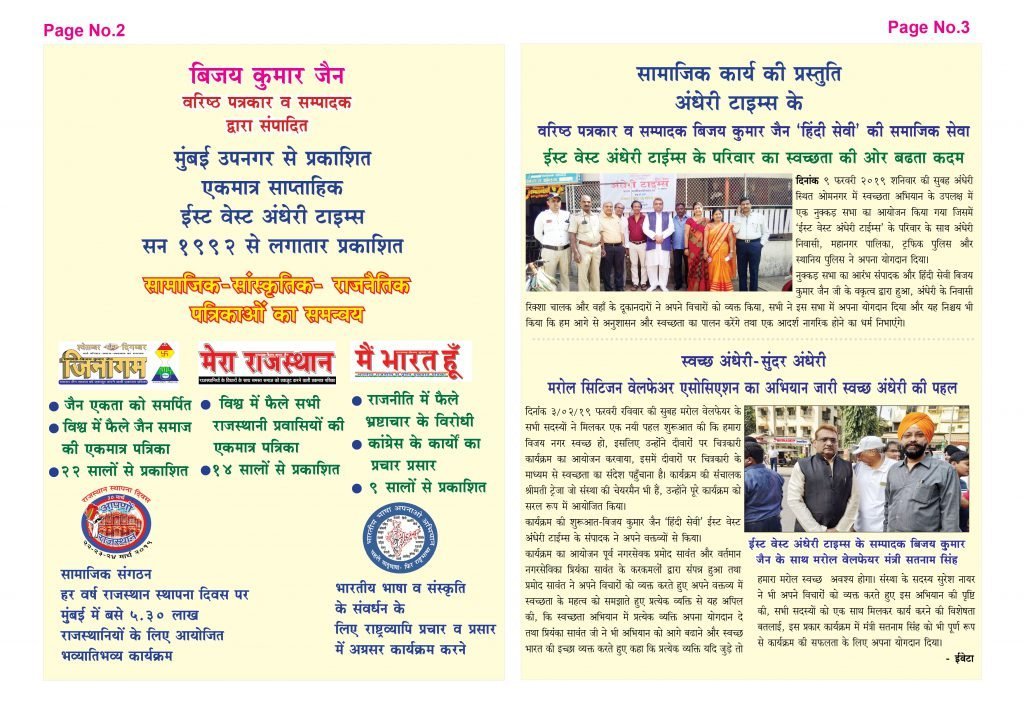